SureGrow Agricultural Products was established in 1999 by Randy Stephens. The Stephens family has been in the agricultural fertilizer and chemical business since 1961. They have been involved with various businesses during this time.

With a combined total of 223 years experience, the SureGrow team is knowledgeable about products, their use on crops and conditions in which they should be used. SureGrow is dedicated to providing customers with the best products and services available in the farm industry today.

The Stephens family has been growing and selling pecans in Comanche County since the late 1800s. As a young child, Randy would go to his grandfather’s farm in Gustine and watch his grandfather, George Stephens, harvest native pecans using a cane and a tarp. He could not wait until he was old enough to help. This was before mechanical shakers and pickers. George would use the cane to knock the pecans off the trees and onto the tarp. They would then be picked up by hand. Eventually, George made enough money from his pecans to purchase a tractor-mounted shaker. Randy’s father, Ronnie Stephens, also had 10 acres of native pecans trees on his farm and ranch in Gustine, Texas. Rodney Stephens, Randy’s brother, still maintains and harvests this orchard today.

In 1988, Randy and his father started managing 80 acres of pecans for Mrs. Jack Duffy of Fort Worth, Texas, around the Proctor Lake area.

Eventually, in 1993, Randy and Ronnie had the opportunity to purchase a ranch north of De Leon, Texas from Buster Hansen. This ranch currently has 150 acres of native pecan trees that are harvested annually.

After graduating from Texas Tech University in 1991 with a degree in Agriculture, Randy returned to work for his father’s company, S&H Chemical. In 1997, Randy married Kris Midkiff of Midland, Texas, who graduated from TCU in 1994. After the sale of S&H Chemical in 1998, Randy and Kris started SureGrow Ag Products in 1999. In 2015, they purchased the former De Leon/Golden Peanut Company facility in downtown De Leon, renaming it De Leon SG Nut Company. It has cold storage facilities for storing pecans for orchards and pecan shellers in the community. Randy and his son, Robert, who is currently a student at Texas Tech University, grow watermelons, cotton, and peanuts along with pecans. They raise cattle together, also.

Randy had always watched the activity on the pecan orchards around Proctor Lake. In particular, he watched as Salem Abraham of Canadian, Texas, accumulated multiple pecan orchards, eventually forming Leon River Pecans. Tyler Womack was the manager of this orchard; and under his care, the trees became vibrant and renewed.

Around Christmas 2020, Salem decided to sell the orchard; and Randy saw his opportunity. Randy and Kris purchased the 850-acre orchard and changed the name to Leon Valley Pecans, a division of RP Stephens Farm and Ranch.

After the unexpected passing of Tyler Womack in August of 2021, Cody Lampman agreed to step in as a manager of the Leon Valley Pecan orchard. This orchard consists of Wichita, Western, Cheyenne, and Pawnee pecan varieties. The Stephens family is excited to carry on the tradition of pecans in Comanche County. 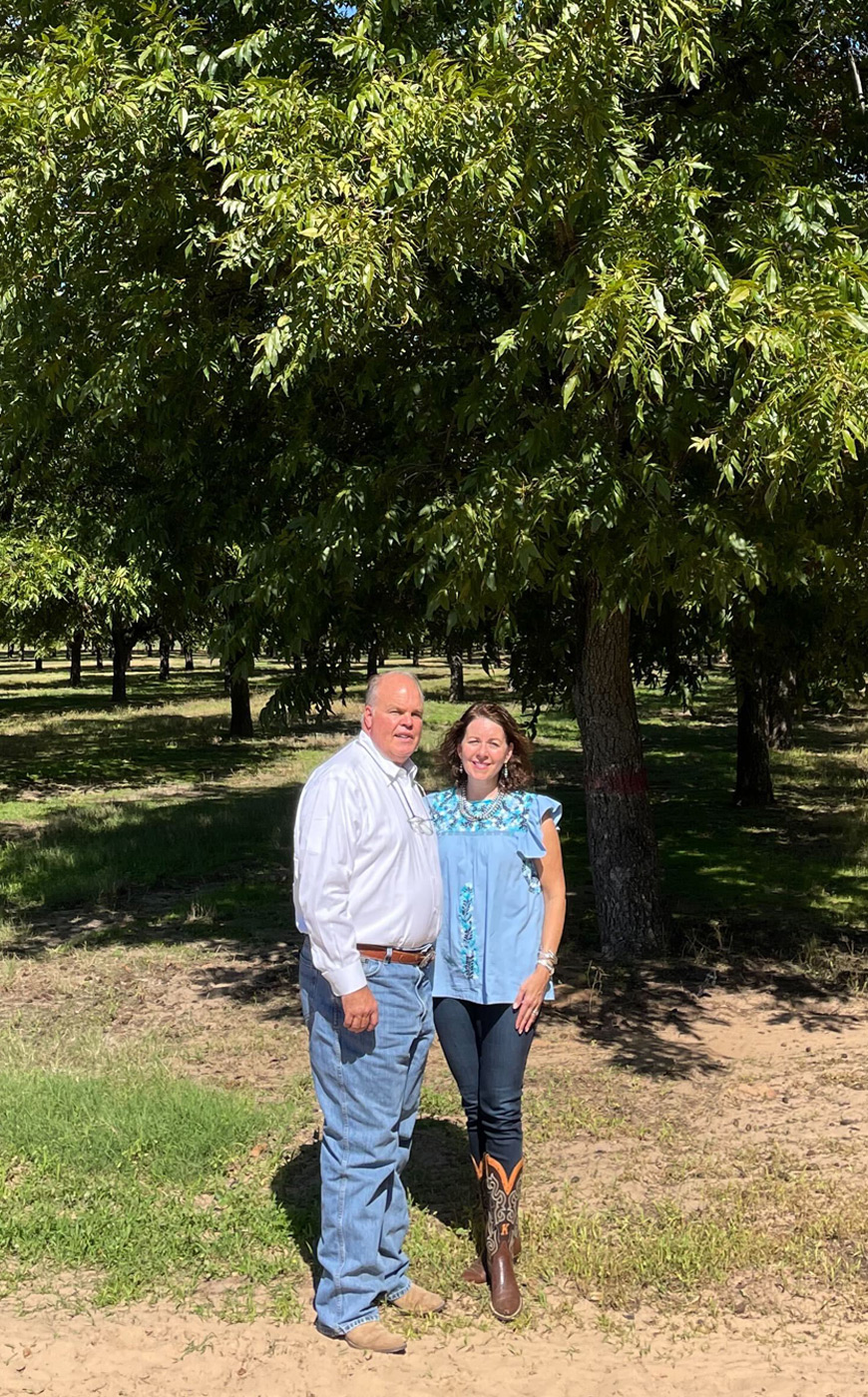 2006 Businessman of the Year

2011 Comanche Chamber of Commerce – Ag Family of the Year